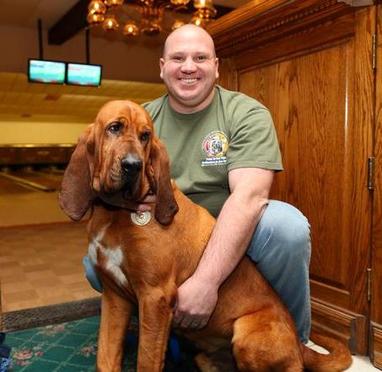 In 2009 “Gus” was rescued, adopted, and completed his initial training. He was assigned to Cpl. Tim Corbett, who was selected and trained by the Barboursville Police Department, WV to be his handler/partner.  Gus is a 100 pound, energetic and friendly Bloodhound who specializes in tracking and trailing humans for the purpose of Law Enforcement Search and Rescue. Gus loves to find people. He trains continuously with Cpl. Corbett, and is a member of the National Police Bloodhound Association and the Trailing Group of the WV Police Canine Association, which meets monthly in various areas of West Virginia to train.  Gus and Cpl. Corbett attend both the WVPCA and NPBA Annual Seminars for Training and Certification each year.  Gus has completed over 2000 hours of training so far in his career.  In addition to Gus’s Official Police duties, he is a celebrity within the community making appearances at local schools and organizations as part of the Barboursville Police Department’s Safety and Drug Awareness Presentations and has even led the annual Barboursville Fall Fest Parade.
Gus loves rawhides and toys, playing “hide & seek” or tag, or just chasing people around.  He gets excited when it’s time to train or to go out and find someone.  His favorite thing in the whole world is just meeting new people.  The only dislikes that Gus has is cats, or a bad person being put inside his patrol vehicle.  Oh, and like most dogs, don’t ever grab his hips! 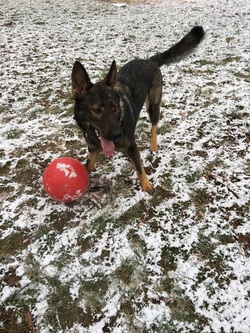 Rookie is a two-year-old German Shepherd Dog certified in Patrol and currently training for Explosive Detection.  K9 Rookie is partnered with Officer Jeffrey Seamans of the Lower Merion Police Department, Ardmore, PA.  K9 Rookie graduated from patrol school in December of 2015 and had the distinct honor of being the first patrol dog to graduate from the Penn Vet Working Dog Center in Philadelphia, PA.  Rookie will never say no to a game of fetch, she loves hanging out with her family, and lives to play hide and seek at work.  Rookie has a strong dislike for being told to get off the couch at home and a equally strong dislike for people that run from the police. 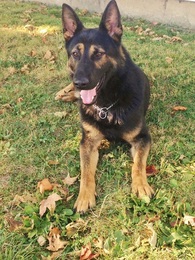 K9 Falk is a 2 year old German Shepherd certified in Patrol, narcotics, and tracking work.  K9 Falk is assigned to Officer Todd Shong.  Officer Shong has been with the Wellston Police Department (OH) since 2002.  Falk is Officer Shong’s first police K-9 and they completed training together in the fall of 2015. K9 Falk was appointed to the police department in October of 2015.  K9 Falk likes to play fetch and chewing on his Kong, he also likes training days and going to work.  Falk really enjoys spending time at home with Officer Shong and his family and socializing with kids and people in the community.  Falk strongly dislikes anyone with intent to assault, escape, or evade officers. 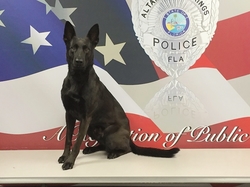 K9 Milow is a 2 ½ year old German Shepherd certified in Patrol and Narcotics Detection.  He is assigned to Senior Police Officer David Strong of the Altamonte Springs (FL) Police Department. Together they completed the 480 hour FDLE’s K9 Team Standards school and were certified in March 2015.  This team was then certified in Narcotics Detection shortly thereafter.  Milow looks forward to his weekly training days and enjoys socializing with other members of the agency.  He has a strong work drive and is always aiming to please SPO Strong.  Milow is also known for his impressive speed and his desire to run.  While off duty Milow enjoys playing with SPO Strong’s personal dogs, and his favorite toy is his Kong.  The small patch of white on Milow’s upper chest marks the spot where he loves to be petted.  However, Milow is not a fan of baths or having his nails trimmed.